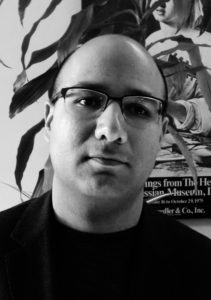 Cosim Sayid earned his PhD in Philosophy in September 2019 from the CUNY Graduate Center. As a grad student, he taught courses in Cultural Diversity and Philosophy as well as Political Science at CUNY York College, where he was also Quantitative Reasoning Fellow in the Math Department.

Cosim was most recently Lecturer in Philosophy at Princeton University, where he returns for the Fall 2020 term, as preceptor in introductory metaphysics and epistemology; he previously taught ethics there.

Cosim writes primarily in the philosophy of language and law. He’s also interested in (inter alia) ethics, philosophy of art, and philosophy of science; a list of Cosim’s talks is available.

Cosim’s dissertation — Intention and Interpretation in Law — supervised by Stephen Neale (with Noël Carroll, Michael Devitt, and Jeremy Waldron), is on interpretation and meaning in legal contexts. Cosim used a Gricean theory of communication to constitutively explain the basis of duties, immunities, powers, privileges, and rights — the legal profile — possessed by actors within a legal system in virtue of their legally authoritative communicative intentions and relations. This allowed Cosim to speak clearly to what’s communicated between legal agents and how to interpret that content using available evidence. That account was then applied to statutory interpretation and contract law. Using the notion of creative interpretation, which Cosim developed by analogy with some species of literary and musical interpretation, Cosim discussed how the law, using new conceptual resources, creates new authoritative interpretations to flesh out previously confused or inchoate content. This study allows us to go, in a limited sense Cosim described, beyond what legal actors actually communicated via their speech-acts, while carefully maintaining an epistemically objective inquiry in which there are boundary conditions on the output of creative interpretation. Cosim applied that project of creative interpretation to the idea of reasonable doubt in criminal law, and actual malice in defamation law. Creative interpretation can also be used to address vague or borderline cases. Cosim concluded by suggesting avenues for future work in administrative, and constitutional, law.

Cosim just finished a piece about knowledge-norms and the mere likelihood evidentiary standard in most common-law civil matters; his current effort focuses on legal texts as blueprints, and he is beginning research to better explicate the the conservative virtue of adhering to precedent that’s judicially manifested in the stare decisis doctrine. Also in the pipeline is a paper on agent-relative notions of the good.

Before coming to philosophy, Cosim worked as a lawyer (mostly handling litigation in real estate and securities). As an undergrad, he did research in biophysical chemistry.

(Cosim usually doesn’t refer to himself in the third-person.)

Except where otherwise noted, content on this site is licensed under a Creative Commons Attribution-NonCommercial-ShareAlike 4.0 International license.

Built with WordPress | Protected by Akismet | Powered by CUNY